The antenna for SK6WM 2304 MHz EME is the  25.6 m dish of Onsala Space Observatory (OSO). The gain of the antenna is over 53 dBi on this frequency. 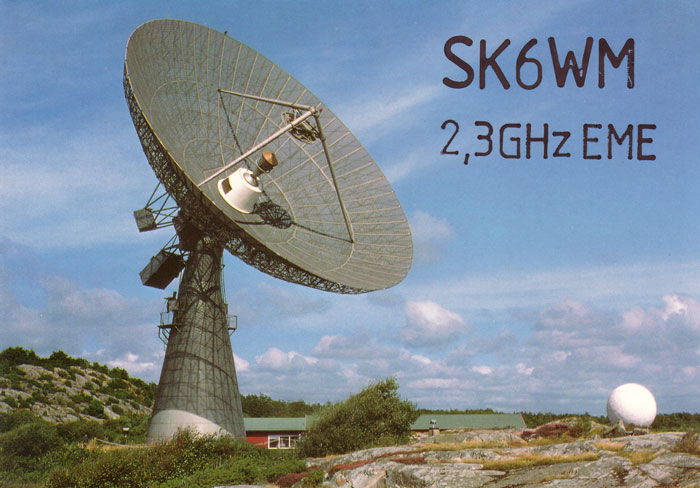 The hams involved in this operation was SM6EBM, Björn (now SK), SM0PYP, Paul and SM6FHZ, Ingolf. Other participants were the members of the astronomy evening class taught by Christer Andersson of OSO.

The transmitter was crystal controlled to 2304.267 MHz, CW only. Final amplifier was a Thompson TWT delivering 10 W RF. The TWT was situated at the feed in "tubus" just behind the vertex of the dish. Preamplifier and protection relay was connected directly to the polarizer/coax-WG transition. This polarizer/coax-WG transition was especially made for connecting to a suitable cut/flange in the conical feed horn for the cassegrain feed system of the dish. We had receive capability on both 2304 and 2320 MHz.

Echoes from the moon peaked a solid 4 S-units above the noise in 2.4 kHz BW, very nice. The liberation fading could be seen very clearly on the s-meter of the receiver. We measured about 3 dB of moon noise, i.e. the receive performance was in practice moon noise limited. We did not measure sun noise. 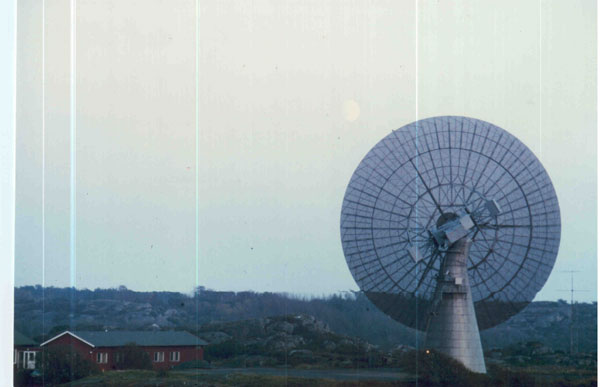 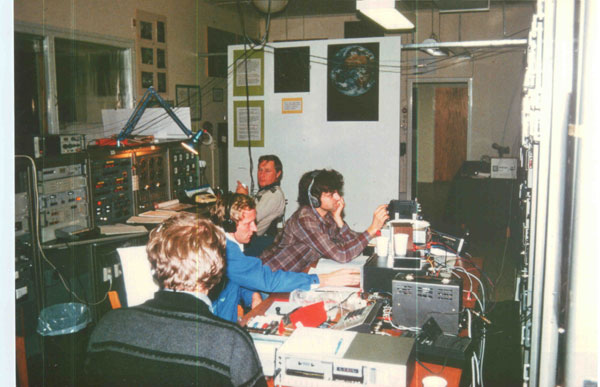 Operators: In rear Christer Andersson (Head of OSO 25.6 m telescope), SM0PYP, Paul, tuning the receiver, Unknown operator and SM6EBM, Björn (with his back to the camera) making tape recordings. 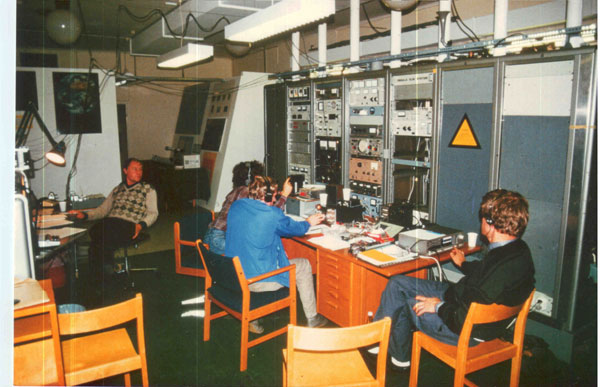 From left to right: Christer Andersson (Head of OSO 25.6 m telescope) controlling the dish position S/W, SM0PYP, Paul, tuning the receiver, Unknown operator in blue jacket and SM6EBM, Björn (with his back to the camera) making tape recordings.

We apologies for the bad photo quality, the pictures were taken with a old steam camera and later scanned in order to get it into this space. Thanks to Paul, WA6PY, SM0PYP, for finding the pictures to share with us!