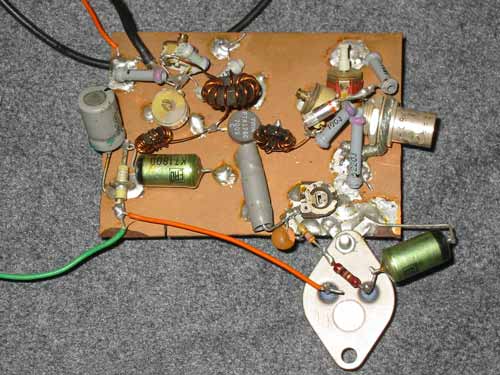 When I first used the amplifier it was on it's own as the main PA feeding an indoor dipole. With this set-up I worked W3FD and W3ARK in Pennsylvania as well as a few other DX-stations in February of 1979 on 10 m CW.

After that the indoor dipole was replaced by a 4 el home made yagi at 10 magl. With this set-up I worked 15 US-stations as well as a number of other DX-stations on 10 m CW. The most distant station worked was WB5ELW and WD5GVN in Texas. This 4 el yagi is the same as you can see on the picture on the start page. Still working very good.

In September 1979 I added a home made tube amplifier as the final PA. The tube amplifier was a 4X150A in grounded grid configuration delivering about 100 W output with about 10 dB of gain. With this set-up I worked 48 states on 10 m CW from September 1979 to November 1981. I never found any station from Wyoming or Hawaii. Also a number of other DX-stations were worked. The most spectacular QSO was a long path contact with AF6S (S.F. Ca) in April 1981. Another fun QSO was with KL7MF (Alaska) at midnight local time in December 1979, probably via Aurora E propagation.

A goal I had was to work all 50 US states on 10 m CW. I did not managed that in solar cycle 21, nor in cycle 22, but I finally worked Wyoming and Hawaii in cycle 23. I still miss a QSL from North Dakota in order to apply for the WAS award. But I'll get ND one day!

In the Solid State amplifier a TRW PT-4176C VHF transistor was used. The transistor is rated 10 w output, I think. I never found any data sheets for it, so I'm not sure. I was running it at 12 V and it delivered about 10 W with about half a watt of drive.

I will now use the design and most of the components for a 3 W driver to a 10 m beacon. It will then be housed in a shielded box.