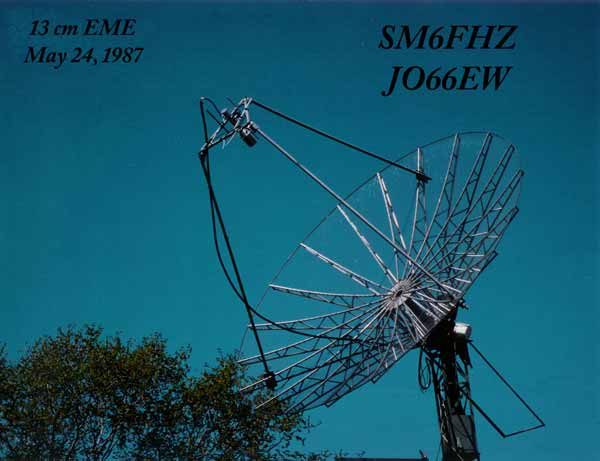 On 13 cm the amplifier was a dual tube, water cooled 8907 amplifier with about 500 w input power and 120 W output. You could actually hear the water form air bubbles from the heat generated when you pressed the key down.......

Water cooling is not always easy. When W3IWI/8 was QRV and I waited for my turn in the sked list, the PA started to leak water in to the cavity of the amplifier. While tracking the moon and listening to them I had to seal the leak and get the water out of the cavity. I managed to get it all fixed just in time to the sked and worked them OK.

One station I heard several times on 13 cm EME, but unfortunately never managed to work, was the grand old man of 13 cm EME, W4HHK.

On 23 cm I also had consistent echoes on CW and even SSB echoes when the conditions were good. It is a odd feeling to hear your own voice coming back from the moon. When the echoes was at it's best the quality was so good that I could actually recognize my own voice from the echoes. When testing echoes on CW when the conditions were good, I reduced the Tx power to the point where I just barely could detect the echoes. The Tx power at the feed was then less the 25 W. On 23 cm the set-up gave about 12.5 dB of sun noise and 4.5 dB of cold sky to ground noise.